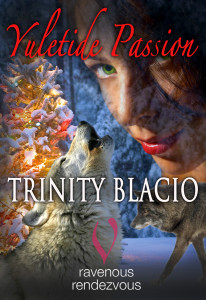 Emile Garland always believed she’d end up an old lady surrounded with cats, but she’d have dogs instead. Her sex life-what sex life? Any time she had hopes for seducing a man, he’d disappear. Emile was giving Santa one last opportunity to bring her a mate, but if something didn’t happen by Christmas, she was giving up.

Ever since his parents were murdered on Christmas Eve, Baas Sather has hated the holiday, so he never celebrated it. Now, at the age of fifty and in his prime as a werewolf, he and four other pack leaders need to find a mate. But not one female in their group or the bordering ones carries the special scent. Baas had never considered anyone that wasn’t a were as a possible mate. Alphas were known for their aggressive behavior and their strong sexual needs were too much for one human female, at least that’s what he’d always believed.

Then a week before Yuletide, everything changed when she walked into their lives. One careless, and if he had anything to say about it it, soon-to-be-dead wolf had beaten and starved his mate and cubs. It fell to Baas and his brothers to take care of anyone who got out of hand within their pack. However, when one Emile Garland, a local social worker shows up, he’s not prepared for her smart-alec mouth. Now all he could think about was how to convince her that she was made for him and his pack leaders…and how they were going to protect her from a psychotic stalker.

Emile gulped down the last of her cold coffee and cringed as she stared at the file before her. God, how she hated to work the month of December, there was always that one  family that reminded her to much of her own life and sure enough this year was no
exception.

Emile Garland, was thirty three years old. For the past four years, each year the situations seemed to get worse and worse. Last week, the first week in December, she had been handed a special case. A family needed her special skills as a social worker and this
one was right on cue.

The pictures of Mrs.Vango not only sent a shiver down her spine, but also made had the hairs on the back of her neck rise. Bruises marred her pretty face. The pictures of her children were horrible, all three children looked as if they had been starved. She nibbled at the inside of her cheek. Emile knew the family was in “Their” territory, so why weren’t they stepping up to help this woman? Wasn’t she part of their pack? Why hadn’t she healed,
if she was a shifter? Did that mean she was human? Too many questions, but one thing was for sure, she would not let anyone, not even a shifter family, go without or suffer.
Nothing made her more furious than to see children abused. It most likely had to be because of her background, being abused by her father for more than six years. Yes, she knew what it was like personally and they had only survived because of a case worker
like herself who had stepped in and helped her mother.

She looked at the picture of herself and mother that she kept on her desk. Emile had been thirteen in the picture. It was two years after their escape and freedom, but sadly enough her mother had died three years later from cancer.

Alone at the age of sixteen, Emile had disappeared. Living on the streets she had refused to go back to her father. Who knew what waited for her there. Nom not even that great lady could have saved her from her fate, so she had taken off right after her mom’s
funeral and never looked back.

It was time to go. She closed the file and stuffed it into her brief case and logged off the computer. She wouldn’t be returning to the office after her visit to the family. Her plans were for heading home and soaking in a hot bath.

Her car was packed with groceries, which had stayed nice and cold since it was only twenty degrees outside, one of the curses of living in upper Michigan. Emile even had a twenty pound turkey in the truck and large ham for New Years, along with a key to a local motel room, just in case of an emergency.

Out of her own money she had reserved a double room for Mrs.Vango and her family, just in case the asshole husband came home. She had already sent fort a locksmith and had deadbolts installed on their doors.

“Heading out I see?” Her boss Rose Ann asked as she peeked out of her office.

“Yes, it’s time I made an appearance. I won’t be back until Monday morning. I’ll going straight home afterword.” She zipped up her heavy duty coat and pulled on her gloves.

“Be careful. Mrs. Vango just called to thank you for the deadbolts, seems the husband tried to come back last night, but the cops were there. So she was real grateful for the extra protection. You know you don’t have to do that, use your own money. Make sure you call me when you get home.”

She shrugged. “It’s not like I have much use for all that money. My mom made sure I was well taken care of, even if I didn’t get it until I turned twenty one. I’ll call when I get home. See you later.” Emile was thankful her boss worried for her. The FBI still couldn’t find any trace of the last three men she had dated and everyone was worried.

She waved and pushed open the door, the cold wind blew inside as she dashed out into the parking lot and click the key to the unlock her Ford Escape. Her Browning Buckmark pistol was in the center console. Emile made sure to go to the shooting range at least once a week and she carried a special permit to carry her pistol anywhere.

All the way to Amy Vango’s home she worked out in her head how to explain all the things she had bought for the family. Her boss hadn’t known, but she had also had three rick of wood delivered yesterday, just to make sure the family would have some for heat.

Was the alpha of the local pack even aware of what was happening to this family? She had heard that four alpha males ran the pack. They were supposed to be very wise business men, but if that was the case, then how had they allowed this happen?

Shifters and other paranormal hadn’t been introduced into the general public yet, but slowly the government officials had let certain groups work with them. Emile had trained for an extra two years how to handle pack and clan issues. Now her training would be put to use, she only hoped she didn’t blow it.

Her car hit a large pot hole, drawing her out of her straying thoughts. She pulled onto the
hidden drive and cringed. The large home before her had one window with wood covering it, gutters hanging loose, swinging in the air, just waiting for enough wind to send them falling.