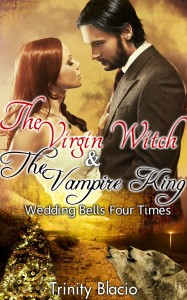 Best-selling paranormal romance author Trinity Blacio brings her characters from the beloved short story, The Virgin Witch and The Vampire King back in this riveting page-turner that culminates in not one, but four, supernatural Christmas marriages.
The ancient scrolls decreed that she was made for the Vampire King. But they failed to mentioned that she would also be mated to two werewolf brothers and a prehistoric vampire.

When the four of them join forces to protect her, love her, and drive her crazy, Beth knows she’s in trouble. Not to mention the fact that war is breaking out all around them and Beth has to plan for her wedding to not one man, but four.

Edward had always been a patient man, but after two kidnappings, a shooting and being cursed, he was ready to rip someone apart. However, he wasn’t the only one.
Dred and Rock Nester, werewolf twin brothers, were hired to guard the King’s woman. The only problem was she was also their mate as was the Vampire King himself.
Lucas, one of the original vampires, and mate to Beth Roman wakes up to a new world and a human witch standing before him. A war is brewing around them, but his only concern is her safety. Nothing or no one would harm their woman even if all of then have to coexist with the other men. 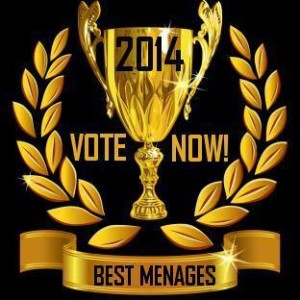 Eleven months and three weeks ago to the day, Beth Roman had set out on a journey that she thought would end her life. Instead, here she stood staring out the window of her new home – well new to her – a 300 year-old castle, with over 40 bedrooms, three kitchens and 16 bathrooms. And that was just the main building which was now her place of residence.

She had yet to explore it all, but it still seemed cold and foreign to her. Even after adding what she could for decorations around the place, it didn’t seem to warm up much. Every time Beth went around a corner, someone she didn’t know would be there, checking her out or just plain watching her. It was irritating and scary.

For the past three months, she’d been waiting for Nora, her best friend. Edward kept promising her that she was okay, and that Nora would be there as soon as soon as it was possible, but still nothing. Not only was Beth worried, but now she was getting pissed off.

Her life was complicated now. Beth wanted things to be simple and she wanted her friend back.

She turned away from the window and stared at her desk. It was solid Oak, just like she had asked for, but what lay on top of it was what really set her off. People ought to know not to get a redhead witch angry.

The invitation for their wedding had arrived in the mail and it was nothing like the one she’d chosen. As a matter of fact, the date wasn’t even right, not to mention the color was not what she picked. Both she and Edward had written their own words, but that was gone too.

Glaring at the open invite, Beth stomped over to the desk and grabbed the ugly thing. “Who the hell ever heard of a gray wedding invitation?” she snarled and looked down at the printed words:

Request your presence on December24, the year of 2020

at the Kings Hall.

“Human joining!! Who the hell is going to come to a wedding on Christmas Eve!” she screeched and stared at the offending invite. Smoke rose up and she glared at it as the paper slowly burned in her hand before it disappeared. Small black flakes floated in the air around her.

The door flew open with a bang and Beth’s drop dead gorgeous guard, Dred Nester, stood there with his gun drawn, ready to take out anyone who threatened her. She shook her head and smiled. “I’m fine Dred, just had one of my moments.”

Over the past year, Beth had grown real close to the Nester brothers. Both Dred and Rock were almost as close to her as Nora. Beth just wished her sex drive would shut up when they were around. Thank God she could hide some of her arousal, but even Beth couldn’t hide her scent and they were always sniffing round her.

There he went sniffing the air, before turning his gaze on her. “You didn’t turn anyone to ash now, did you?” Dred winked at her and put his pistol back in his holster.

“You know I didn’t. It’s just me, like it always is, sitting in my ivory tower. I hate this. I should be out shopping for Christmas, but I can’t do anything with so many threats.” She plopped down on the chair behind her desk.

“Who did you give the invites to after I approved of them?” she asked, glaring at him. “I know it was a while ago, so if you can’t remember…”

“Avril took them and said he’d make sure everything was done, why? Did he do something wrong?” He sat on the corner of her desk in front her as his brother came in behind him.

Not wanting to cause trouble for Edward’s steward, Beth waved her hand and got up to walk toward the window again, hiding her face. One thing about Dred and Rock, they always knew she was lying with one look. “It’s nothing. I’m sure Edward wanted the changes.”

“I wanted what change?” Edward’s deep voice asked behind her and she jerked around.

“It’s nothing, don’t worry about it,” she tried to change the subject, stepping into his arms and laying her head on his chest. “This is a surprise. I thought you were in meetings all day?” She took a deep breath and tried to snuggle closer to him.

He wrapped his hand in her hair and yanked her head back. “I do have meetings, but I know when my woman is upset. Tell me,” he ordered in the voice that always sent a shiver down her spine.

“I was just surprised about the change in the invitations to our wedding, that’s all. I thought we were going for a late November wedding. I mean the extra time to Christmas is okay,” she whispered.

“I never changed them. The last time I’d seen them was when you and I discussed the wording and the pattern.  Is it different? Let me see.” He released her and walked behind her desk, searching.

“It’s not there. I kind of burned it,” she grumbled as his dark blue eyes met hers over the desk.

He sniffed the air and shook his head. “And why did you burn our wedding invitation?” Edward crossed his arms over his chest and waited.

“Because it wasn’t a wedding invite, just a damn piece of cardboard! After all that work, it’s gone! Why did I even bother? Who the hell is going to show up at our wedding on Christmas Eve?” She threw up her hands and started to walk towards the door, angry at herself for blowing up when it was obvious he hadn’t known about it.

“Maybe we should just forget about this anyway. It’s no big deal.” Beth was halfway out the door before Edward picked her up, flinging her over his shoulder. He slapped her ass as she tried to get down.

“You know damn will this is important to me!” He stormed down the hall with Dred and Rock behind them, watching.

“Edward, put me down!” Beth rose up to see people moving out of Edward’s way, smiling. “Damn it, this is embarrassing. Let me down.”

“Hold still!” He slid his hand up her skirt, the one he’d laid out on the bed for her to wear earlier.

“Why are you wearing panties?” Stopping in the middle of the hall, Edward traced her pantie seam with his fingers. “You should know by now I don’t allow such garments when we are at home.” He lowered her to the ground, disappointment in his gaze.