The Virgin Witch and The Vampire King 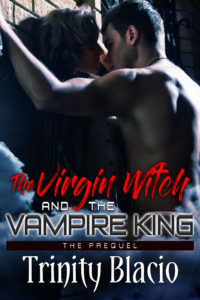 In the runaway best selling short story The Virgin Witch and the Vampire King, the Virgin Witch Beth has hidden all her life, afraid to unleash her powers and draw attention to herself.  Her parents are dead, even though her father still has a tendency to annoy her.  Beth’s only friend and confident, Nora, goes missing. But no one cares or will even help her.

A week before Halloween, Edward, the Vampire King, discovers a prophecy that states he must find his mate and join their souls…if he even has one.  Edward must now find his missing secretary, Nora, and his intended mate.

War threatens to break out between all races.  Only the marriage of Beth and Edward can end the threat.

Is there time to rescue their friend and fulfill their destiny before midnight on All Hallow’s Eve?

The cold drizzle seeped through her coat. Beth wandered down an alley and searched for
Nora who had disappeared two nights ago. When she didn’t show up for their usual Friday night out, Beth knew something had happened to her best friend. Beth even tried to contact Nora’s boss, the Vampire King, but he was seeing no one.

He didn’t give a rat’s ass if his secretary vanished or not. She remembered seeing him once when she was waiting for her friend at her office. He’d come out of his office with two blond bimbos on his arms. They clung to his six and half foot tall frame.

He was built, but not like those muscular men you saw in magazines. His dark blue eyes
took in everything in the room as he seemed to glide across the floor. Even his black hair didn’t seem to have a strand out of place; he was so perfect. Right then and there she wanted to run up to him and mess up his perfect image.

Beth shook her head and anger radiated off her body. In a million years, she would have
never believed she would be here on her birthday. Beth scanned the last place Nora had been seen, afraid of the worst for her friend. “No, Mr. Perfect wouldn’t be caught dead messing his shoes up helping to find his own secretary. He’s most likely curled up with those fake double DD’s.”

She didn’t know why, but the thought of him with someone else almost made her want to
change the blond bitches into donkeys. If he wanted some ass, she could make sure he would have some ass, literally.

Even though the rain had destroyed much of the evidence, Beth could still see and smell
what humans and others couldn’t. Some would call it a gift, but she called it her own personal curse.

Blood splattered the wall of one building, a piece of skin hung from a window frame, and
black fur, which she knew belonged to one of the many were’s in the area, was flecked all over the alleyway.

Beth shivered. Children ran down the street with their bags of trick-or-treat candy.
Halloween was the one day of the year she always hid in her house, afraid that the other world creatures would know she could see them. Now here she was outside searching for Nora.

God, she hated this holiday, and on top of it, the moon was full casting shadows
everywhere.

Looking over her shoulder, she lifted the hood of her sweatshirt, careful not to draw
attention to herself. Ghostly apparitions moved along the streets in hopes someone would see them.

Beth zipped her coat and pulled out the Ziploc bag that contained Nora’s shirt. She sniffed
it. Being part were and witch, it would help her find her best friend. The strong scent of

Nora’s blood and the others clogged her senses. The invisible trail of smells, blood, and hair stretched out before her.

Slowly, she tracked the weres’ movements down the alley. Their trail led toward the woods.

“You have to be alright, Nora. No one but you understands me,” she mumbled, and then
stopped. Ahead, a bright, fiery glow flickered in the night.

“How ignorant can you be? I swear wolves are so full of themselves! Anyone can spot that
stupid fire.”

Nora was close, but so were the captives. She moved to the right and scanned the forest
floor. Hidden traps had been set all along the ground covered by dead brush. An owl hooted in a distant tree, and chants used in black magic swirled around her. She smiled and shook her head.

“They can’t even get the spell right,” she snickered.

Not paying attention to the path, Beth tripped over something. She landed face first in the
mud. What the hell? She lay there for a minute and listened. Had anyone heard her? While she waited, she checked for traps around her and wiped the mud from her face.

Beth looked down at what she’d tripped over and found her friend. Nora’s dead eyes stared
up at her, bite marks riddled her body. Beth’s stomach rebelled, and she lost her supper.