Master of the Cats Series: The Lion’s Secret Love 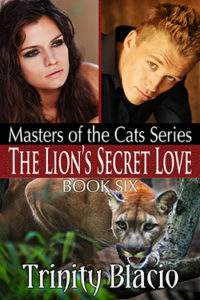 In this sixth title in the best-selling Masters of the Cats series, cat shifter Opal Vanberth was young for her kind, but she knew she had an old soul. And she had always felt more comfortable with humans than her own kind. Maybe it was the fact she had been raised by a human heroin addict, or that she had been in and out of foster care for most of her life. One thing was for sure, she never expected men like River, Rhodes and Zanger to be hers. And she always worried something else would take her happiness away, as it always did.

River-Wander had studied in universities unknown to humans, fought beasts that would make any man run in fear and created a warrior species, which he was the leader of, to protect the world around him. But so far, he wasn’t doing a very good job of protecting his own meru. Rhodes, Zanger and River have bonded together and were determined to protect their female, even if it meant one of them must leave their fold for a dangerous mission. Can River hold his family together, knowing what his weru, Zanger, must do to survive? Or should he take his family and leave Earth all together?