The Devil Came Out to Play 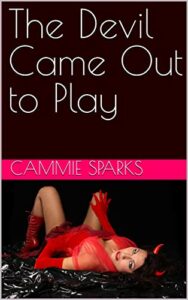 Tora Garcia was in a rut, sexually and mentally. She caught her younger sister and her ex doing the funky chicken on her bed. What was sad, the creep never screwed her like what she had witnessed. Maybe being a slut was the way to go. I mean who didn’t want their hair pulled, while some stud had his way with you.

Hence, why she was now standing in the middle of the biggest living room, in a red teddy, stockings, with horns and tail. The night before Halloween, Devils Night and Tora had agreed to attend a sex party with her bestie, Carol Hugh. She was not going to regret this night. To do everything she had dreamed of doing, but had been too scared to and Carol was on that list, but so was her boss, King Perez.