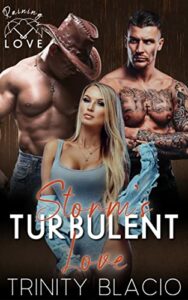 When it’s Raining Love why stop at one man to warm your bed when you can have two? This spring, join some of your favorite contemporary romance authors for a menage romance series that will have you curling up with your ereader hoping the rain never ends.

Rolling thunderstorms were always associated with Storm McGrane ever since she was born, during a storm over thirty-four years. Her temper was legendary, but her love was unconditional, unless you screwed her the wrong way, which her last lover had. One move across the country was bad enough, but when two hot city cowboys rescue her from a mud drowning…Her life just turned turbulent.

Ex Marines Todd Rand and Blade Forsite had known from the first day in boot camp their lives were meant to be spent together, but finding the right woman was going to be the problem. Never did it enter their minds that a mud-covered hell cat with a mouth that could put sailors to shame would be her.

Could the two marines capture the wild Storm? Or would her fear of the age difference interfere in their loving, not to mention the psycho ex that had followed her to Abbot, Maine keep them apart.