Raiders of the Lost Heart

Lovers of the Galaxy Series: Raiders of the Lost Heart 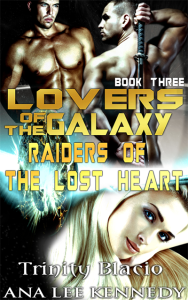 They weren’t supposed to get smarter!

In the third book of the Lovers of the Galaxy series, the Bone Eaters are evolving thanks to the evil genius of the human monster Randolph and Venus not only has to deal with smarter zombies, but also a room full of Alpha warriors who keep challenging each other, including her two out-of-this world husbands, Volund and Jaxxon. With the roller coaster of emotions, the newly pregnant Venus is either scared out of her mind, or sexually frustrated, watching the men prance around her home half naked all the time.

Jealousy was not part of the plan when Volund and Jaxxon agreed to come and save this planet Earth, but it’s exactly what is happening. Not only are they battling insecurities when it comes to their woman, now there is a new threat –a more intelligent being, that is by far more dangerous now thanks to humans tampering with genetics.

Together, the three of them will work together to deal with their personal problems, all the while trying to form some kind of city– a safe place, where everyone can live without fear and not be terrified that some new threat is waiting for them around every corner.