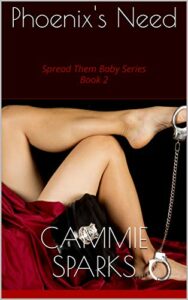 A police officer was supposed to up hold the law, but for the first time, Phoenix Tamlett, the man, was seriously thinking of ignoring this one little rule, murder. The scars and hurt in her expression drove him crazy. But then again, what he planned to do to his woman, might also be considered illegal in some countries, because of his need…and her pleasure. Blithe Vales knew kink, but when her old heart throb came to her rescue dressed in a cop uniform her body melted under his intense gaze, not to mention his touch.