I Dream of Jinns Series: Jeanne-Claude and Eugene’s Magic Lamp 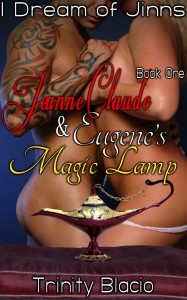 Becca Stewart is in hiding, and an outcast from her family. The only one who believes her and remains her friend is Amy. And that’s only because Amy had witnessed the horrific events with her.

Becca had always been a believer in other beings, but actually seeing vampires rip apart two people one night was just too much for her. But, Becca soon discovers the realm of the Jinn and her soon-to-be two husbands, and her life is changed forever.
The Jinn realm is slowly dying. King Saalis has no choice but to have each of his men in need of a wife send out a personal calling card. Together, the brothers, Jeanne-Claude and Eugene, not only save Becca and Amy, from the wrath of the vampires, but find love in a new world.

For over a thousand years the night creatures, or what humans call Vampires, have been stalking my people. I am king of the Jinn Realm, and my name is Saalis. Over the last three hundred years, these monsters have destroyed most of our female population, making our men search other realms and planets for mates. It has come to our attention that certain mortal females can mate with our kind. These humans have the blood type and various magical properties that allow us to change their DNA. With this change comes physical pain for said female, but we have no choice. We are on the verge of extinction, and I will not allow the Jinn to be wiped out.

The following stories are from each male’s point of view as he searches for his mate, hoping he finds her before the fiends of the night discover and destroy her.

My cousins, Jeanne-Claude and Eugene, have volunteered to search for their mate first. Creating a special lamp with their own personal essence, they use this object to attract only the one special woman they are destined to love. Only this woman will be able to open said lamp and connect with them for life.
Chapter One

Becca stared out at the vast sky full of stars through her Celestron CPC telescope that she’d just purchased that day. The balcony off her bedroom was the perfect place for it.

“I swear I feel like a kid on Christmas morning! I’ve been waiting so long for this. I can’t believe I got it for half price!” She twirled around to face Amy and stepped into her Goth-decorated room. Becca loved anything about other worlds —dragons, the Fay, witches, and all sorts of other realms that were on display in her room.

Amy, her best friend and roommate, shook her head. “I don’t know why you wasted all that money on that thing. You could have taken a trip or a nice spa vacation to get out of this stinking small town for a few days.” She flopped down on her bed and stared at Becca. “I mean, look at your room. How much did you spend on that dragon lamp? A hundred and fifty? And what about all those books? Tell me you haven’t read all those reference books?”

“For your information, I love this small town, and who said I wanted to leave?” Becca rolled her eyes. “Most of the nights the sky is clear and it’s quiet. You know what it was like living in Detroit—the noise never stopped. And I happen to love my room. The dragon lamp fits perfectly in here, and yes, I’ve read all of those books.” An image of her rundown apartment flashed through her mind, and a cold chill shot up her spine.

Amy jumped off the bed and hugged her. “Hey, I’m sorry. I didn’t mean to bring up bad memories. I just wish you could find a man. We’ve been here now for a year, and you’ve dated what? Twice? I’ve even found someone, and you know how picky I am. And if buying these things helps to erase what we saw, and then I’m okay with it.” She smiled and stepped back. “But how are you going to find your soul mate if you’re looking through that thing every night? During the day, when you’re off from work, you go antique shopping. Just look at that thing you bought today, Becca!” Amy grabbed an old, lamp and tipped it upside down. “What the hell are you going to do with this? There aren’t any markings on it, and it looks like a kid’s toy. What did you do? Pick this up at a garage sale today?”

Grabbing the lamp before Amy could break it, Becca sighed. “It’s beautiful. And for your information, I got it at the antique shop uptown.” She twirled it around, admiring it.

“Well, I came in here to let you know Hank and I are going to the club in Sioux tonight.” Amy sighed. “We won’t be home until late. Are you going to be okay? I know last night was rough for you, so if you need me to stay home, I can.” Amy cocked her head and studied her.

Becca shrugged. “I have nightmares every once in a while, but I’ll be fine. You’ve done enough for me by moving out here to the middle of nowhere when you could’ve stayed in Detroit. Go have a good time. I’m going to open this lamp and clean it up. Then there’s a good sci-fi movie I wanted to catch later. I’ll be fine.” She pushed Amy toward the bedroom door. “Oh, and when is Hank going to pop the big question?” she asked and grinned as Amy stuck her tongue out at her.

“I was going to wait and tell you…” Her friend held up one hand, flashing her ring in her face. “He asked me last night. That’s why we’re going out to celebrate.” Amy cast her gaze to the floor.

“Becca, he wants to start looking for a house. I told him I needed some time. I can’t leave you here alone. And I wanted to ask you if I can tell him why we moved here.”

Becca could’ve sworn the air in her lungs rushed out all at once. She stumbled to the bed, and her hands shook as she plopped down. Amy had a right to tell Hank, but it was so soon.

“Do you still have that FBI agent’s number?” Amy asked. “I should call him and tell him I’ll be telling Hank what happened. This affects you too, but I don’t want to keep secrets from him.”

“Are you sure you can trust him, Amy? You’ve only known him six months…you know they’re going to do a background check on him, right? I mean, they have to make sure he’s not connected to…Vito Adamo.” She blew the hair out of her face. “Forget I said that. Yes, go ahead and tell him. He’s a fine man, and you’re lucky to have found him. He deserves to know more about you, and I’m sure it’s fine now that Vito has been taken care of.” She sighed and stared at the lamp in her trembling hands.

Amy knelt in front of her and stared into her face. “Are you sure? I can put it off a little while. I don’t want to hurt you, Becca. Have you heard from the agent on the case? I mean, they must have news by now, right? I just wish you would’ve let me call my uncle. We wouldn’t have to worry about them now.”

“God, you’re crazy, Amy. You know your uncle would think we’re nuts. Seriously, vampires in the Mafia? Hell, if you weren’t with me that night even you would have thought I’d flown the coop. I can’t hide forever. Maybe those things aren’t looking for us. Who knows? Maybe they’ve forgotten about us. We both have to go on with our lives. Now get going. I’m sure Hank will be here anytime.” She leaned over and kissed her friend’s head.

Getting up, Amy headed back to the bedroom door and turned to stare at her. “Are you sure?”

“Go, get out of here, and yes, I’m sure. We need to move on. Oh, and tell Hank he has great taste in rings.” She smiled as Amy walked out the door, closing it behind her.

Hopefully Hank wouldn’t think both of them were whack jobs. She could only pray he didn’t say anything to anyone.