Invasion of Her Heart

Lovers of the Galaxy Series: Invasion of Her Heart 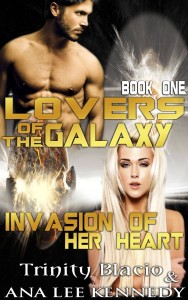 Strangled by the sun’s heat and ravaged by the human race, Earth is a dying planet. With planets disappearing from the galaxy at an alarming rate, a last ditch effort is put into high gear to save as many planets as possible.

Now, 300 years later, with Bone Eaters scavenging Earth’s surface and few true humans left, the Ruling Body of Planets has decided to send males and females to Earth to re-populate it and save extinct plants and animals. Utilizing time travel, these extra-terrestrials go back in time to retrieve people and re-introduce them to the world as they re-build and re-populate the planet.

Venus Dalshvire, the daughter of murdered scientists, lives alone with her dog for company. Barricaded in a former bank, Venus raises a garden on the rooftop and scavenges during the heat of the day to avoid the Bone Eaters. When two beautiful brothers with odd tools and weapons show up to claim her as their mate, she’s secretly pleased but also desperate to maintain her independence. Who would have thought ET’s could be so hot? However, Venus has a problem. She hasn’t been with a man for years and their touch prompts desire in her unlike any she’s ever felt before.

Planet Azutu, the first to send males to Earth, gives brothers Volund and Jaxxon their initial mission. Equipped with Earth’s entire history, the brothers arrive in a small, desolate town near a Great Lake. Upon finding a silver-haired blonde female, each man knows that Venus is a lovely mate. Their dilemma, however, is that they both want her.