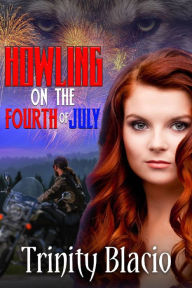 Siren and ARE best-selling author Trinity Blacio weaves her unique tales of werewolf ménage with The Fourth of July in this explosive novella.

Violet Vanworth had lost everything, she had no one¬at least she’d thought she had no one, until Violet found the letter from her dead mother. Violet fired her guards and began looking for the father she never knew.

Having one over-protective mother was nothing compared to what she found at the Fourth of July family gathering. Four males, one father, a brother, a step-mom and two grandfathers all of whom were bound to make sure she was safe and guarded again.

But no one had prepared her for the love of not one, but four men; four men who had captured her heart and stole her independence in just two days. Together, not only do they love her like the men in those romance stories, but they also protect her from those that want her dead.

Will she be able to survive the fireworks they create every time they touch her?