Her Stepbrothers Are Saber Tooth Tigers 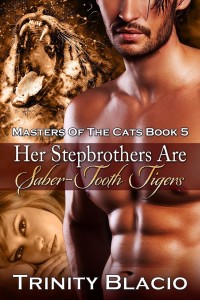 Leta Boyer is not the typical biker lady one would think of. She wrote erotic romance on the side, while taking care of her father. Who was the picture of what someone would think of as a biker, but he was also President of one of the largest bikers groups around. She had thought they were close, but Leta found out the hard way how wrong she was when her father comes back home after a run, married to a lady, who could shift into Saber-tooth tiger. She also happens to bring along her two stepsons and the biggest, sexiest, and dangerous man she’s ever seen.

Drew and Colin Sabor, twins were a deadly pair, but the man that claimed them was three times worse, Guryon. Guryon was the oldest warrior on Earth, but that wouldn’t stop the three dangerous men from claiming the Little Red head that ran around the biker club house slapping men twice her size if they stepped in her way. She might be used to the dangerous life of a biker, but would she be able to handle the life of a warrior’s wife.