Her Stepbrothers Are Dragons 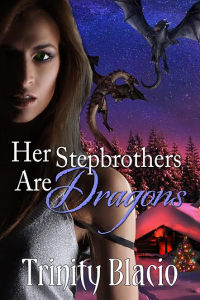 Holly Brewner knew she had a problem with Christmas Eve, but she thought her way of celebrating was better anyway. Twelve days of gifts and on Christmas Day, the big one. Her father and she had celebrated every year like this, but this year was going to be different.

This year she had a new stepmom and two stepbrothers, who happened to be dragons, and that changed all her plans.

Upon their arrival, her house burned down, she was shot at, and now she was staying in a cave for two days as if that were normal. On top of that, her two stepbrothers, Darius and Malcolm Longfellow, were claiming they were her mates and that they were going to marry her on Christmas Eve.

“On the first day of Christmas, my personal elf sent to you two, the first six gifts of twelve, to two very naughty boys,’” Darius read. “Naughty boys,” he growled and picked up the long package marked “First Day.”

“Well, she has a sense of humor. That is good,” Malcolm said, pointing out Holly’s name.

“Go on, you open the first and I’ll get the second,” his brother said.

“I have a bad feeling about this,” Malcolm mumbled but opened the package, wishing he hadn’t.

“I couldn’t very well send a partridge, so I sent the branch he would have sat on,” her note said. “Son of a bitch. There’s bird shit all over that thing.” He growled and dropped the box to glare at his brother. “Sense of humor? Open yours now.”

Two turtledoves would be the next gift, but Darius had no idea what she’d send in their place. His brother wrinkled his nose. “Two much-melted turtle dove ice creams. ‘Naughty boys don’t get ice cream,’ her note says.” He shook his head.

“Shit,” Darius mumbled. “Three French hens. What the hell can she send us now?” He fumbled with the box to the point that he just ripped it open, sending its contents everywhere.

“‘You are not entitled to the actual hens you haven’t earned, so I send you a part of the bird —feathers.’” Malcolm smiled, looking at him. “Feathers look so good on you,” he teased, and Darius growled, brushing off what he could.