Her Stepbrothers Are Demons 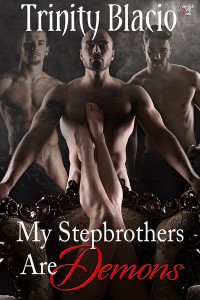 Alex Cander had her life all planned out – mom married off, check. Police academy graduation (all done in secret) – double check. Assigned to one of the biggest cases in her county – triple check.

Sure enough all hell breaks loose, literally, when her stepfather asks her to help his sons get acquainted to their surroundings. Not only were her supposed stepbrothers claiming her as theirs, but it turns out they are demons.  On top of this, she learns that her own grandparents weren’t even human?

And that’s no even the half of it!

A being called Darkness has stepped forward claiming her as well. Now she is mated to three demons that not only control her every movement, but also her heart…someone pinch her please.

Darren grinned, “I asked if you knew what we did, like our jobs?”

“No, and wipe off that grin. I can’t help it if the two of you have my body doing the hormonal jig,” she grumbled and squirmed as they both stared down at her.

“We’ll get to that hormonal jig part in a second, but as to my question, we are something like you. I think that is why we might have been drawn to you. Your strength and values, not just your looks, are breath-taking. We watch over certain individuals making sure that when they go to different planets, or dimensions, they do not cause a rift or disturb the races that resides there.”

Alex just stared up at the men totally blown away by what Darren had just said. She was still in shock about what they were. The fact that there were other species, planets and dimensions had her head spinning.