Her Stepbrothers Are Angels 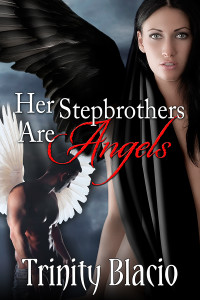 Dixie Squire is half demon on her mother’s side and has an embarrassing gift that she can’t reveal to her father. Who wants to tell their daddy that she needs to have sex every week in order to survive? Talk about a complex.

But that isn’t’ the worst part. It seems her father has just taken an angel for a mate—not just any angel, but one that used to hunt down and destroy demons, right alongside with her two very hot new stepbrothers.

Eae and Leo only wanted their mother to be happy, but they never dreamed they’d be tracking down their wayward stepsister. But when they stepped into Dixie’s old apartment, Eae and Leo realized they were not only tracking their stepsister, but their woman, and that they weren’t the only ones after her.