Her Stepbrother is a Monster

Stepbrothers Series: Her Stepbrother is a Monster 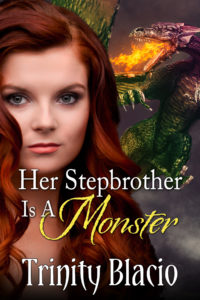 Her mother had married a Monster!
Maven Hoffman’s new family was made of these legends come to life, and, as if that wasn’t enough, it would seem her new stepfather was a dragon, a Monster of the sky! And she’d just learned that her mother was one now too!
But she had to admit her handsome stepbrother was in a league of his own. He had the body of Neptune, blazing eyes that melted her on the spot when he focused on her and, of course, his dragon was the most beautiful thing Maven had ever seen.
Thrust into a world she knew nothing about, Maven thought she was handling the news about her mother’s marriage and transformation pretty well, until Maven was informed that she too was a dragon. She was a deadly, flying monster, but on the bright side maybe she could fry her stalker ex-husband.