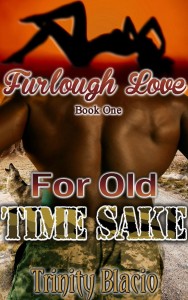 Roadside bombs, dodging bullets, snipers, and spiders the size of small dogs would destroy any man. Tired of losing men to suicide, mental institutions, and Rambo acts, General Zachariah Hagano takes matters into his own hands. He orders two weeks of mandatory Furlough Love for each man who serves one year of continuous service, starting with himself.

General Zackariah Hagano stared out of his command tent at the arid Iraqi desert, his station for over two years. His last personal time had been a little over a year before. He grinned and adjusted his cock at the mental image of Red lying on the beach, allowing the waves to wash over her naked body.

“One more time, Red, one more time,” he said pulling out his phone and dialing his aide. Two weeks with her were just what he needed. Even though she was human, that woman could handle anything he gave her.

“Private Carlton, I need you to book me a plane to Bangor, Maine, and have the helicopter ready to pick me up tomorrow morning at five sharp. Also, call and make reservations at Carla’s Bed & Breakfast. I’ll be staying for ten nights, coming back on the twelfth. I expect you to take two weeks off, too, soldier. We’ll be going back out on our return,” Zack ordered.

“No, that will be all. But, Carlton, make sure you don’t come back from break like last time.” It had taken him and three others to hold the man down till they could find a female shifter who would allow Carlton to fuck her for two days straight.

One thing they had learned long ago—with the intense missions he and his men undertook, any of their kind could only last a year without taking a leave of absence before the animal inside them broke loose.

“No, sir. Already have plans laid out, sir,” Carlton stated.

“Good, then I’ll see you back here on the twelfth, Private.” He shut his phone off and shook his head. The man had been a corporal, but after that last stunt, he’d no choice but to drop him back to private. He had put civilians at risk and could have brought attention to their kind.

The last time Zack had gone to Maine, he had meant to get together with one of the females in the Bush Pack, but once he’d checked into the bed and breakfast, his wolf got a peek at the owner, and no one would do but her. Thank god she had been aware of their kind and understood his need.