Enchantress of the Empress 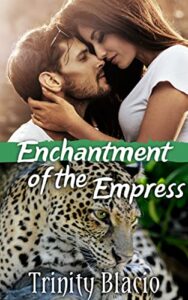 Sierra Blacksmith is a woman of many passions and unrealized potential. Being the youngest daughter of a werewolf and a Fey is not always easy, not to mention the fact that her father is also the clan leader. Sierra longs for a normal life. Just when she thinks things can’t get any worse, she discovers that her boyfriend is a two-timing Troll! He was a Troll, the sworn enemy of her family, who would go to any lengths to get between her virgin thighs. And if that wasn’t enough, Roman and Garth Doming, two hot strange men, walk into her life claiming to be her mates! They not only dominated both her thoughts and desires but also introduce her to her third mate, a half-demon and half-fey.