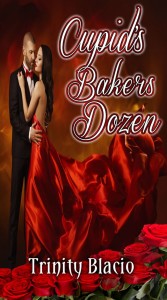 Cupid, or Eros as his friends called him, couldn’t believe what the fates were having him do. A week before Valentine’s Day, getting twelve of the hardest cases in the world, his personal friends and the women that they were paired, together with was going to take creative ideas.

Oh, he would do it. They wouldn’t know what hit them by the time he finished with them. Their love lives were going to get really hot.

But little did Eros know the fates had added a thirteenth name, and it was his.