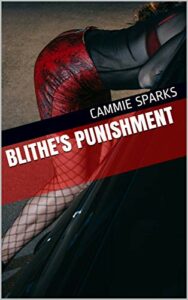 Phoenix Tamlett had always followed the rules, hell he lived by them. It was part of his job and he was damn good at it. But there was one person who could scatter all thought and reason out of his head, Blithe Vales. One look at her and all he wanted to do was push her up against the wall, forcing her to spread those long legs for his inspection. Not to mention, handcuffs and a hard stick.Blithe Vales had it with men, moving back home to help her aging mother, she runs into the one man that had always been out of her reach, until now.