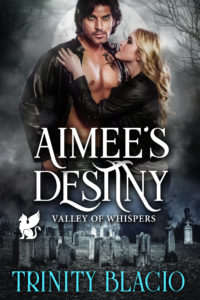 Aimee Koor has always considered herself a fighter. After all, she had grown up with a dad who would have fit in during the Stone Age, literally. Aimee just never expected to be using her trust hammer as a weapon instead of a gun.

Trey Joinster is on the hunt for those responsible for trying to murder his beloved Queen. He can’t believe it when he makes a rookie Gargoyle mistake and reveals himself to a human-even if she is his mate!

In a world where statues shouldn’t move and Gargoyles are just for tourists to photograph, Aimee learns there is more to one amazing statue than she expected. If she doesn’t kill him first, can Trey convince Aimee that stone really can have a beating heart if touched by the right woman?